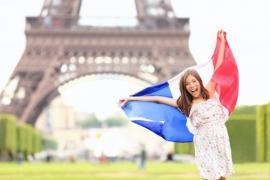 Even the campsites in France are unique and are more akin to miniature theme park resorts. Add in the beautiful Mediterranean climate in the south of the country. With an average summer temperature high of over twenty-five degrees and the colder weather of the sun-capped Mont Blanc region, you need to see France at least once. Compare cheap hotels in Paris today to see how much you can save.

The attractions in Paris are truly spectacular. Who could fail to be impressed with such wonders as the Eiffel Tower, Notre Dame Cathedral, the Sacre Coeur Basilica, the Louvre Museum, the Palais des Papes, the Pont du Gard Bridge, Mont Saint Michel Island, Chateau de Chambard, the Palace of Versailles and the many D Day sights, including the sombre Normandy American Cemetery and Memorial!

Add in the chic beaches, harbours, promenades, nightclubs and casinos of the French Riviera (which typically gets over three hundred days of sun each year). The stunning ski resorts in the Alps particularly Chamonix with its Mont Blanc Mountain backdrop. Not forgetting the awe-inspiring national parks in Provence, the stately castles in the Loire Valley and of course the ‘romantic ambience’ of Paris, and you get just a tiny sample of what this very proud country has to offer the lucky visitor!

And in case you think the kids might still be a little underwhelmed with all this extravagance, you can always bring them to Disneyland Paris to see Mickey Mouse, Minnie, the Disney Princess and friends. Then let them experience all the thrills and spills of the park’s Indiana Jones, Thunder Mountain, Pirates of the Caribbean, It’s a Small World, Tower of Terror, Buzz Lightyear, Ratatouille The Adventure, Star Wars and Phantom Manor rides!

Paris for the wine connoisseur

The real home of the grape, France excels in producing some of the most excellent wines in the World. So much so that many visitor itineraries are based around sampling as much of this exquisite elixir as possible. Tasting trips to vineyards in the more famous French wine-growing regions of Rhone, Burgundy, Alsace, Bordeaux, Beaujolais and not forgetting Champaign, are becoming increasingly popular.

And if fashionable shopping establishments are your thing, France will spoil you rotten. The country is the birthplace of Haut Couture and is home many of the World’s most popular fashion brands, including Yves Saint Lauren, Jean-Paul Gaultier, Chanel, Givenchy and Dior!

The sporting enthusiast will also find much to be pleased about when visiting France, from the World famous Tour de France bicycle race to passionate soccer or international rugby games in the impressive Stade de France. And if that’s not enough, there’s the French Open Tennis, Le Mans Car Race and Monaco Grand Prix (just across the French border in the French Rivera) to cheer along to with the crowds.

Another great feature of France is the ease at which visitors can travel between and within cities. France has almost thirty thousand kilometres of the railway infrastructure, as well as the infamous TGV train, which can travel at a speed of over three hundred kilometres per hour. Add in the many city underground rail networks (including the Paris, Lyon, Lille, Marseilles, Toulouse and Rennes metros), trams, and cable cars, and motorways.

You can see why visitors return again and again to seek out the attractions still not ticked off their must-see French holiday list. We compare cheap hotel deals in Paris, French Riviera, Nice, Lyon, Chamonix and Cannes, to name just a few of the top tourist destinations in France.

The most romantic city in the world, Paris, will enthral with its sophistication and unique attractions. One of the beautiful things about visiting Paris is the vast array of sights that do not charge an entrance fee. These include; The Sacre Coeur Basilica, Notre Dame Cathedral, The Musee Carnavalet, and of course, the many stunning formal and very colourful public parks, including Parc Monceau, Jardin des Tuileries and Parc des Buttes-Chaumont. See the main tourist attractions in Paris below.

For a more unusual and slightly morbid day out, take a visit to either Montparnasse Cemetery of Pere Lachaise Cemetery where you can pay homage to the graves of The Doors’ Jim Morrison, Oscar Wilde, John Paul Sartre, and Simon de Beauvoir. If your legs haven’t given up the ghost, a nice long walk along the tree-lined Champs Elysees street, with its cafes, shops, and cinemas, or to Paris’ Latin Quarter on The Left Bank, with its trendy shops, cafes, restaurants, and bars, will be most rewarding. Thank you for visiting our hotel comparison site. We hope you have a relaxing and enjoyable trip.