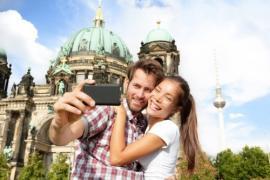 Compare cheap hotels in Berlin for great deals with CompareTravel.ie. The capital city of a new unified Germany, Berlin is not only historic in so many ways reflected in the many memorials and museums focusing on its troubled past. It is also filled with natural beauty, as over a 3rd of this great city comprises of parks, woodland, public gardens, lakes and the River Spree. The city is also the 3rd most visited in Europe and has nearly eight hundred hotels to cater for your every need.

Germany is now double the fun since east and west became one in 1990. It is known throughout the world for its efficiency and financial prowess. The country also has an abundance of spectacular attractions and activities for all ages. Enter your dates and destination to compare great online deals from the top hotel comparison websites. Review the cheapest deals and book online today. You may be surprised at how much you can save!

Some of the country’s highlights include the iconic Berlin Wall, Checkpoint Charlie, Brandenburg Gate, Reichstag Building and the Museum Island in Berlin. Not to forget the stunning hillside Neuschwanstein Castle in Bavaria which is like something out of a fairytale.

However, despite such an eclectic choice of things to do and see in Germany, the calling for many to visit the country is the infamous Oktoberfest beer festival that takes place in Berlin and Munich at the end of September and lasts for over two weeks. The festival attracts over six million visitors each year. While listening to live music in the enormous festival tents, visitors can also attend the festival carnival and ride the death-defying, multi-looped rollercoaster a slightly less daunting challenge after consuming a glass of beer.

Unlike its French and Italian neighbours, when it comes to the matter of choice of alcoholic beverage, Germany excels in beer, mainly wheat beers rather than wine. Popular German beers to indulge the thirsty visitor include Lowenbrau, Paulaner and Spatenbrau. And if you still favour a glass of vino, then the most popular choice among locals is the sweet white wines produced from the Riesling grape. Wine tours around the country’s thirteen wine-producing regions are available for those who might be particularly thirsty!

The country’s gastronomic delights differ enormously from its European neighbours, using the simple sausage format as the vehicle to serve many of its favourite meats. The tastiest sausage products to compliment the country’s fashionable two-litre glasses of beer are the Bratwurst which is made from pork and spices, Blutwurst for those a little braver, as this one is made from blood and the Wiener smoked sausage. A nice slice of authentic Black Forest Gateaux known as Schwarzwalder Kirschtorte will also hit the spot as a very rewarding dessert. After France, Germany has the most Michelin star awards and so fine dining will always be just around the corner.

Berlin for the sport enthusiast

Those intending to visit the country to partake in its sporting activities can attend a passionate soccer encounter between Bayern Munich and Borussia Monchengladbach in the enormous Olympic Stadium or suck in the fumes of an exhilarating German Grand Prix. Visitors who might prefer to engage in a sport directly can go skiing in one of the many German ski resorts. Particularly in the Alps and German Central Uplands, or take a swing in any one of the country’s six hundred and fifty golf course. Many are located in scenic forests, beside lakes, along the coast or with the alps as a backdrop.

Shopping in Germany can be an exciting pastime with so many department stores, arts and crafts shops, shopping centres and markets, including some wonderfully atmospheric winter markets. The most famous shopping streets in the country include Zeil in Frankfurt, Kaufinger in Munich, Schildergasse in Cologne, Kurfurstendamm in Berlin and Mo in Hamburg. Birkenstock shoes, porcelain figurines and cuckoo clocks are popular German purchases along with some delicious Ritter Sport chocolate!

To make it possible for the visitor to reach his or her intended destination, be it a short trip to a city attraction or some longer city-hopping journey. Germany has probably the most efficient transport infrastructure in the world.

So get a move on, make Germany your holiday destination and have the time of your life. We compare cheap hotel deals in Berlin, Cologne, Frankfurt, Hamburg, Heidelberg, Munich, to name just a few of our top German destinations. Thank you for visiting our hotel comparison site. We hope you have a relaxing and enjoyable trip.

Many visitors to this unique city are attracted by its East and West German historical significance and of course its place in the world wars. So typically start their fact-finding mission at the infamous eighteenth-century Brandenburg Gate. Originally located in what was called No Man’s Land, this towering structure has a beautiful courtyard and plaza at its front to stroll around, and people watch. Or you can instead take a relaxing trip in one of the many horse carriages onsite.

Equally famous is the Berlin Gate Memorial Centre, where visitors can see a watchtower and the remains of the wall that divided east from west. A visit to the significant Checkpoint Charlie booth in the Allied Museum an open-air museum, followed by a visit to the eerie Holocaust Memorial, should put everything into perspective.

The city is filled with beautiful squares and boulevards, including the Gendarmenmarkt square, with its amazing cathedrals and concert house, and the nineteenth century Unter den Linden boulevard, with its opera house, university, museum and cathedral, among many other historic buildings.

The city’s main shopping streets and areas are Friedrichstrasel, Hackischer Markt, Kurfurstendamm and Schlossstrasse. Berlin is a shopper’s paradise, filled with department stores (including the popular KaDeWe), flea markets, designer outlets, shopping centres/malls (including the impressive Alexa Mall with nearly two hundred outlets!) and quaint arts and crafts stores. Please keep in mind that many shops remain closed on Sundays.

Berlin even has its cultural island, The Museum Island on the River Spree, which a UNESCO World Heritage Site and is the location of some of the city’s more famous museums. Including the Pergamon Museum, Altes Museum, Bode Museum, Neues Musem and Alte Nationalgalerie. See top attractions below.

1. The Reichstag Building: Enormous nineteenth-century building initially constructed to house the German Empire’s parliament. Inside the building is a beautiful glass dome with great city views.

2. The Berlin Television Tower – Fernsehturm: The highest structure in Berlin, standing at over three hundred and fifty metres tall, the tower offers fantastic views over the entire city.

3. Pergamon Museum: Located on the city’s Museum Island, the museum is one of the most visited attractions in the whole country, typically attracting over one million per annum. Inside are amazing exhibits including; The Pergamon Altar, Market Gate of Miletus and some magnificent Islamic, Middle Eastern, Greek and Roman antiquities.

4. Berlin Cathedral: Stunning fifteenth-century protestant, former Catholic, a neo-renaissance cathedral with panoramic views across the city. Inside is an enormous dome with wonderfully colourful frescos and a historic pipe organ.

5. Charlottenburg Palace: Eighteenth-century baroque-style palace just outside Berlin City, next to the River Spree. Outside the castle are pretty gardens with a mausoleum, lake and pavilion and inside are some wonderfully decorated rooms including the Porcelain Cabinet Room, and the rococo-styled State Apartments.

6. German Museum of Technology: Museum with rail, space, telecommunications and film exhibits. World war two planes and ships are of particular interest. You could spend up to six hours here and still not see/experience its wonders.

7. The Olympic Stadium: Built-in ninety thirty-six and home to the Hertha Berlin soccer team, the Olympic Stadium is the 2nd biggest in Germany. The stadium has a visitor’s centre and also hosts international concerts.

8. Designpanoptikum: One of the most unusual and famous museums in the city, filled with a motley collection of art constructed from everyday industrial items and artefacts.

10. Alexanderplatz: Enormous public square which also acts as an ideal meeting place due to the transport options operating out of the square, including the S and U-Bhan.

11. German Historical Museum: Museum in a historic building with impressive World War One and Two exhibitions, among so much more. Compare cheap hotels in Berlin today for great deals.