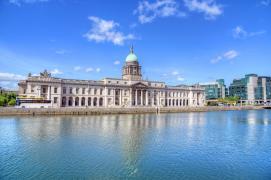 Compare hotels in Dublin for cheap online deals with CompareTravel.ie, we are an Irish hotel price comparison website. A céad míle fáilte “a hundred thousand welcomes” awaits the lucky visitor to the Emerald Isle. Whether you are travelling for business or leisure, you can discover great deals on accommodation in the city centre or at Dublin Airport using our comparison engine.

To find hotel deals, input your destination and dates and click “Search”. We compare the top travel sites in one easy search to find you the lowest prices in Dublin and around Ireland. Discover the best hotels today, you will be surprised at how much you can save. We hope you have a relaxing and enjoyable stay.

What To Do During Your Hotel Stay In Ireland

The country will entertain you with its Irish traditions and rich cultural background. Having once been ruled by Celtic chieftain tribes and then invaded by the Vikings, Normans and the English. The land and its people have built up so many ancient treasures to show off and remarkable stories to recite. Plus Ireland is the birthplace of such exquisite delights like Riverdance, The Book of Kells, U2, Irish Coffee, Guinness and Father Ted. You can tell that the “craic will be ninety” from the moment you step foot on the very soil!

As well as being able to soak up the country’s distinctive atmosphere, the visitor will pick up ‘the gift of the gab’, after romancing the Blarney Stone in Cork by kissing it. Once kissed, the visitor will have a way with words that may put him and her on a verbal and literary platform along with other great ‘wordy’ Irish geniuses. Such as Oscar Wilde, Samuel Beckett, James Joyce, William Butler Yeats, Brendan Behan, Oliver Goldsmith, George Bernard Shaw, Patrick Kavanagh, Jonathan Swift, Bram Stoker and Seamus Heaney!

With over eight thousand miles of rivers, two thousand miles of coast, and thousands of fish-laden lakes, Ireland is an angler’s paradise. The River Shannon alone runs through much of the country, being over two hundred miles long, and is an excellent way of touring the country using a pleasure cruiser. The river also connects with many of the country’s canals, including the Royal and Grand canals in Dublin and the Shannon Erne Waterway, linking the Republic of Ireland and Northern Ireland.

One of the highlights of a visit to Ireland is a trip to the humble pub. Ireland has a pub for every six hundred people, with over seven and a half thousand pubs in the country. Some of the most popular pubs in the state include O’Donoghue’s in Dublin, a famous traditional Irish pub with a reputation for some of the best Irish music sessions in the city. Johnnie Foxes pub, which sits high up in the Dublin Mountains and known for it’s lively ‘Hooley Nights’, and Moran’s Oyster Cottage thatched pub in Galway, famous for its seafood dishes.

For those who want to seek out the ‘real’ Ireland, then a visit to the country’s Gaeltacht regions of Mayo, Kerry, Donegal and Galway is a must. In Gaeltacht towns like Gweedore in Donegal, the Aran Islands off the Mayo coast, Dunquin in Kerry and Spiddal in Galway. Only ten per cent of the Irish people regularly converse in Gaelic. So you may miss out on hearing this wonderfully melodic language if you only visit the main suburban cities.

Those lucky enough to be in Ireland on the 17th of March can soak up the fantastic atmosphere of the annual Saint Patrick’s Day celebrations. The celebration has now turned into a week-long festival of outdoor Céilí dancing, funfairs, fireworks shows, story-telling, walking tours, art exhibitions and craft beer and food markets. All activities are culminating in a vast, colourful parade through the streets of Dublin City Centre. The festivities attract over a million people out onto the streets. Remember to bring your shamrock and silly leprechaun hat!

If the cultural sightseeing becomes overwhelming, then a trip to one of the many GAA stadiums around the country to watch a Gaelic hurling or football match will have you shouting along with the passionate locals, as soon as the national anthem has ended. The sport of hurling is supposedly the fastest field game on the planet, and the skill involved will amaze those witnessing the game for the first time.

For a country so small, it has so much to offer the visitor. The width of the island of Ireland is only one hundred and seventy miles, and its length is only three hundred miles, so you can easily see as much of the country as your stamina allows. Provided you don’t overindulge in too much Irish craic the night. We compare the best deals in Dublin, Cork, Waterford, Wexford, Limerick, Athlone, Wicklow, Tipperary, Sligo, to name just a few of our top Irish destinations. Thank you for visiting our hotel comparison site. We hope you have a relaxing and enjoyable trip.

Dublin has over one million individual personalities to greet any visitor. You’ll find writers, musicians, artists, sports fanatics and coffee and tea drinking connoisseurs in every corner all with a story to tell. The city is bisected by the wonderfully romantic River Liffey, with its twenty-one uniquely crafted bridges, and boasts many wondrous attractions for young and old.

The birthplace of writing icons like Oscar Wilde, Samuel Beckett, James Joyce, Brendan Behan, William Butler Yeats and George Bernard Shaw, Dublin is flowing with literary genius. Add in the gourmet food, local brew and vibrant nightlife, and you have all the ingredients for one hell of a party. Compare cheap hotels in Dublin today for great online deals, check out our Dublin Travel Guide here.