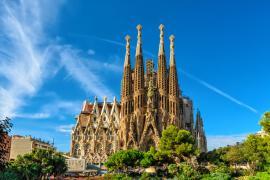 Cheap hotels in Barcelona, review high-value hotel rates for your visit to Spain with CompareTravel.ie. Spain from Andalucía in the south to the Basque region in northern Spain will dazzle the senses.

From quaint medieval streets to awe-inspiring modern architecture, Barcelona will flood the senses and your camera with beautiful memories.

Barcelona is a proud Catalan city, with its language, traditions and vibrant culture. Please browse our extensive hotel list for low-cost deals. Compare hotels in Barcelona today, input your destination and dates to review prices and save!

Things to do during your hotel stay in Barcelona

The city boasts an abundance of attractions, sun-drenched beaches, Picasso, Miro, and Dali treasure-filled museums; stunning Gaudi inspired buildings and the boulevard in Las Ramblas. It also has excellent gastronomy, hectic nightlife and one of the most famous and successful football teams in the world in Barcelona FC. Temperatures in the city tend to range from 13oC in Jan to 30oC in August!

A day trip, visit the sun-drenched beaches on the Spanish mainland along the buzzing ‘Costas’, such as Costa Dorada, Costa de la Luz, Costa de Almeria, Costa Blanca and Costa del Sol. Soak up the rays while drinking some thirst-quenching, fruity Sangria. The four main beaches in the city, stretching over an impressive 4 kilometres, are Barceloneta Beach, Icaria Beach, Mar Bella Beach which is very popular with naturists.

One of the best ways to explore the gothic Old Town is by foot, although the city also has an impressive metro and bus infrastructure, where you can buy combined metro and bus two and three-day ticket packages. Opening hours for many Old Town establishments are typically between 9.30 to 1.30 pm and 4.30 to 8 pm, and the phone number for the local emergency services is 112.

If it’s family fun you’re looking for, the kids will have a whale of a time in the many wondrous amusements and theme parks scattered throughout Spain. These include Port Aventura near Salou, Tivoli World near Torremolinos, Terra Mitica in Barcelona, Parque de Attractions in Madrid and Isla Magica in Seville.

Barcelona is also very family-orientated, and visits to Barcelona Zoo, Barcelona Aquarium, The Magic Fountain and the amusement park of Tibidabo will thrill the younger visitors and those feeling young at heart!

If it’s a gastronomic experience your seeking, then look no further than downing some exquisite Serrano Ham, visually stunning Paella, spicy Chorizo, refreshing Gazpacho soup and of course the varied delights of the Tapas Bar.

The gastronomy is Barcelona rivals that of any major international city and has undergone a culinary revolution, now offering many creative dishes to indulge the taste buds. Some of the more regional dishes include Botifarra a type of sausage, Longaniza sausages and Arros Negre rice with squid.

Wine aficionados will also be spoilt for choice, with wine regions and appellations such as Rioja, Ribera del Duero, Torro, Jumilla, Priorat, Rueda and not forgetting ‘sparkling’ Cava, all vying to offer you their most exquisite elixirs.

The city is also famous for its high fashion retail outlets, particularly around the Passeig de Gracia and Avda Diagonal, and regularly hosts a high profile urban fashion show called The Brandery.

Take part in some of the many colourful festivals the country has to offer, including the Running of the Bulls in Pamplona, the musical Feria de Abril and religious Semana Santa festivals in Seville, or the religious spectacle of El Rocio in Huelva.

When it comes to festivals, Barcelona will not disappoint. The music festivals include the electronic music-based Sonar festival, the Barcelona Guitar Festival and the International Jazz festival. Throw in the flamenco shows, trade fairs and exhibitions, the Fira de Barcelona is one of the largest trade fairs in Europe and there will be something to suit all tastes, for young and old, holidaymaker or business visitor.

Equally intense and not for the coach potatoes is the energetic Flamenco Spanish music and folk dance, originating from Andalucía. Some of the significant flamenco festivals to visit include the Festival de Cante Grande in Ronda, Festival Flamenco in Torremolinos, Festival de Jerez in Jerez, and Bienal de Flamenco in Malaga and Seville.

Spain is a cultural paradise. Visit the Alhambra Palace in Granada, the Great Mosque of Cordoba; the Gaudi designed Sagrada Familia in Barcelona, the University of Salamanca, and the Santiago de Compostela in Galicia.

Those of a braver disposition can visit the many bullrings around the country, including the fantastic venue in Ronda, a town located on the edge of a seventy-metre canyon in the middle of the Serraniá de Ronda mountain range. Other bullrings of interest can be found in Malaga, Bilbao, Cadiz, San Sebastián, Barcelona, Murcia, and Valencia.

Spain has it all and more. Come for the sun and leave with cultural education. Thank you for visiting our hotel comparison site. We hope that we were able to find you the best hotel deal.

Barcelona has a population of over 1.6 million inhabitants, is the largest Mediterranean Sea coastal city and has a fabulous backdrop of the imposing Serra de Collserola mountain range. Barcelona is probably the most cosmopolitan city in Spain and the tenth most visited city in the world. See the top visitor attractions below.