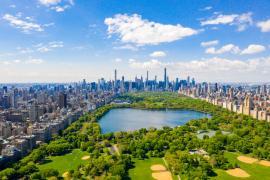 Compare cheap hotels in New York for great deals with CompareTravel.ie. The United States of America will bring out the child in every visitor. The home of Mickey Mouse, Disneyland and Universal Studios in Florida, Legoland in California, the Big Mac, Coca Cola and The Simpsons, the USA is magical in every way.

Not forgetting Hershey’s Chocolate World in Pennsylvania, Yellowstone Park in Wyoming, The Space Centre in Houston and The National Zoo and Museum of National History in Washington are just some of the wondrous attractions that make the USA the best family holiday location on the planet. Input your destination and dates to compare cheap hotels in New York and save.

Things to do during your hotel stay in the US

All generations will be thrilled by the Las Vegas Strip in Las Vegas, the Grand Canyon in Arizona, the Niagara Falls waterfalls, the Statue of Liberty, Central Park and Times Square in New York, the White House in Washington, the Golden Gate Bridge in San Francisco, the Florida Keys in Florida and the very active Kilauea Volcano in Hawaii.

Add in the unusual, strange and downright bizarre attractions along with the infamous, nearly four thousand kilometres, Route 66 highway, including the Chain of Rocks Bridge in St Louis, the Cadillac Ranch in Texas, the Wigwam Motels in Arizona and the Blue Whale of Catoosa, Giant Milk Bottle and Totem Pole Park in Oklahoma. You get a feeling for just how much the USA has to offer, whether you are staying put in the likes of Florida or holidaying by camper van along the highway!

The USA also represents fast food heaven for many, with American diners offering dishes to make your taste buds explode with satisfaction. Gigantic hot dogs, triple-decker burgers, golden southern fried chicken and juicy spare ribs smothered in a spicy sauce, all washed down with a bottle of thirst-quenching Coca Cola are just some of the more common treats on offer. Those seeking the more exotic can try Cajun, Tex-Mex or Creole cuisine.

Wine lovers will also be surprised at the choice of quality, American produced wines available. Amazingly, there are over three thousand vineyards in the USA. However, the most famous wine-growing region is California. Where nearly ninety per cent of the country’s wine originates. Wine tasting tours of the Napa Valley in California can be experienced by bicycle, car, limo, train, hot air balloon or horseback!

Shopping in the USA

The USA has become increasingly popular as a shopping holiday destination, with stores like Bloomingdales, Macy’s, Sears, JC Penny, Forever 21, Nordstrom, Lord and Taylor, Saks Fifth Avenue. Not forgetting Wal-Mart, as well as having some of the biggest shopping malls in the world, including the massive 3.5 million sq ft Mall of America in Minnesota, the 2.8 million sq ft King of Prussia Mall in Philadelphia and the 2.5 million sq ft Destiny USA Mall in New York!

America for the sports enthusiast

If you are all shopped out, a seat at any one of the country’s many American Football stadiums to cheer along the likes of The Chicago Bears or The Dallas Cowboys would be a truly unique American experience. Equally American and thrilling would be a visit to a basketball match, where you might get the chance to see The Harlem Globetrotters slam dunk another score! Ice hockey and Nascar car racing are also popular American sporting attractions for the visitor to experience.

So order those American dollars right now and visit, not only the city but the country that never, ever sleeps. Compare cheap hotels in New York online & save, we hope you have an exciting and enjoyable trip!

New York is the largest populated city in the USA and does everything on a grand scale to keep its nine million inhabitants…and tourists very, very happy. It is divided up into the five mini-states or boroughs of Manhattan with its stunning skyscraper skyline, Queens, Brooklyn, The Bronx and Staten Island.

The first point of call for many visitors to ‘The Big Apple’ tends to be Times Square, which attracts nearly forty million visitors each year so claustrophobics need not apply. Times Square is known internationally for its colourful illuminated billboards and of course its annual New Year’s Eve celebrations.

Times Square leads off to another iconic part of New York City, Broadway, the theatre capital of the world. Broadway is home to forty beautiful theatres, including The Ambassador Theatre, The Broadway Theatre, The Gershwin Theatre and The Majestic Theatre. Popular long-running Broadway shows include Chicago, Les Miserable’s, The Lion King, The Phantom of The Opera, Jersey Boys, Mamma Mia and Wicked. Broadway theatres typically attract twelve million patrons every year, so make sure to pre-book your ticket in advance!

The most famous city park in the world is New York’s Central Park, which is an excellent oasis of tranquillity for those who need to escape the never-ending ‘vibrancy’ of the city that supposedly never sleeps. This massive park covers an area of nearly eight hundred and fifty acres and attracts over thirty-seven million visitors annually. The park is filled with human-made lakes, walking, running tracks, ice skating rinks, a zoo, amphitheatre, wooded areas, children’s playgrounds, and so much more!

New York is the ultimate shopping destination for many visitors. World-famous stores like Bloomingdales, Tiffany and Co, The Apple Store, Macy’s, Toy’s R Us, The Disney Store, Abercrombie and Fitch and Saks Fifth Avenue. The city’s premier shopping street is Fifth Avenue. Another great way of spending a few hours in this fantastic city is to immerse yourself in one of the many passionate sporting activities. Attend a basketball, American football, ice hockey or baseball game where you can shout along to wonderfully named teams such as The New York Yankees, Buffalo Bills, New York Knicks, New York Mets and the Buffalo Sabres.