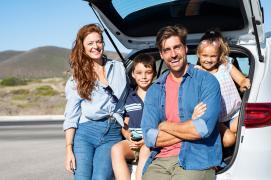 Compare cheap car rentals at Dublin Airport and in the city centre for great deals. Choose from a wide selection of mini, compact, economy, luxury and SUV rentals to suit your trip. Ireland is serviced by a good road infrastructure which makes it easy to travel and discover all the hidden treasures that the Emerald Isle has to offer.

Road markings and signs are excellent, and distances are displayed using km, remember to drive on the left-hand side. The main airports in Ireland are Dublin, Kerry, Shannon Airport, Belfast, Cork & Knock Airport. We aim to provide you with a hassle-free, efficient, friendly and low-cost service to ensure you enjoy your driving experience.

Our car hire packages include theft waiver, 24/7 breakdown assistance and customer support. Prices include tax and airport fees with no hidden charges. You have the option to pick up or drop off the car rental at the airport or in the city centre. You can quickly amend or cancel your bookings online. Compare and book cheap car hire in Dublin today.

You’ll come for the “craic” and leave speaking with the gift of the gab with great memories. Ireland welcomes you wholeheartedly. The only problem is you may not want to leave. Review cheap Irish car hire packages online for great value deals with CompareTravel and save!

Exciting Things To Do In Dublin

Originally a Viking settlement, Dublin is the capital of the Republic of Ireland with a population of over one million people. Jump in and discover the city like a local. Review our tips below on where to go and what to do!

Internationally renowned for producing some of the world’s finest authors, Dublin is steeped in culture and has some of the most elegant Georgian buildings in Europe. Most of its galleries and museums are free to enter.

The city has many music and theatre venues to suit every taste; there are also numerous buskers around the city that will entertain you with their antics.

Dublin is also renowned for its lively pub culture, a lone visitor can enter any pub in Dublin and almost immediately become involved in a friendly discussion with the pub’s patrons about the city’s imponderables, like the weather, football or politics.

If it’s a party atmosphere you’re seeking, then some real pub craic can be found in the trendy Temple Bar area, which can be found just across River Liffey, on the Southside of town.

The cuisine in Dublin has changed dramatically over the years due in the main to the influence of its new multinational resident population.

Once the home of the infamous Dublin Coddle (sausage, bacon, potato and onion based stew) and Dublin Bay Prawns, the city’s restaurants are equally likely to serve you some exquisite French, Japanese, Mexican, Chinese, Italian, Indian, Spanish, Moroccan, Portuguese or Thai delicacies!

Some of the best restaurants in Dublin, although not the cheapest, include The Trocadero, Shanahan’s on the Green, Patrick Guilbaud’s, Chapter One, Locke’s Brasserie, L’ecrivian, The Unicorn, Bon Appétit and Thornton’s.

Another more novel way of seeing the city is using the Viking Splash Tours, which use vehicles that travel across land and water. Compare great online deals for your trip to Dublin, Ireland for the lowest prices. Whether you are planning a family break, mid-week or weekend getaway you can find it here.

Our mission is to help you find a car hire package that suits you at the cheapest price. All our car rental deals include 24/7 customer support with no hidden charges and free cancellation. If you see a better rate anywhere else, we will try our best to beat it. Don’t forget to check out our Dublin Travel Guide here. Compare cheap online car rental deals now and save!

We compare a vast number of small, medium, large, SUV and luxury rental cars in Ireland. Simply input your destination and dates to compare cheap hire packages and save. Compact, hatchback or small cars are best as Dublin city streets can be narrow with most pedestrianised. Traffic can be hectic in morning rush hour. A compact car would be ideal for your trip.

Dublin airport is the largest in the country with visitor numbers hitting over 20 million. It is accessible using the M50 and M1 motorway. Dublin airport car hire desks can be found at Terminal 1 (T1) and Terminal 2 (T2). Rental agents in T1 are in the main arrivals hall. When transferring from T2, you will enter T1 on the departures level. To find the rental companies take the escalator down to level one.

T2 car hire companies can be found on the left-hand side when you enter Terminal 2. The airport has an excellent road infrastructure and is near the main motorways, including both the M1 and M50. All roads are marked and signed posted to help you navigate through the city. Dive on the left-hand side; the urban speed limit is 50km, 80km rural speed limit and 120km on motorways.

We compare great value stress-free car rental at Dublin Airport, Terminals 1 and 2. Whether you are travelling to Dublin on a business trip or seeking to explore Ireland’s hidden gems, you can find a cheap car rental for all occasions. We offer an easy and quick price comparison from the top branded car hire providers. These include Budget, Europcar, Avis, Hertz & Enterprise, to name just a few. Enjoy your trip, drive safely.