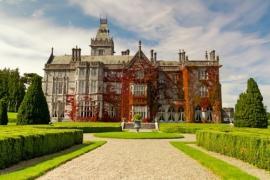 Limerick Travel Guide – Limerick is situated on the River Shannon, the longest river in Ireland, in 2014 it was designated as Ireland’s City of Culture. The city is only a twenty-minute drive from Shannon airport and has much to see, including castles, markets, restaurants, shops and entertainment venues!

Shannon airport is used by 1.4 million passengers each year and is located 24 kilometres from Limerick. Shopping at the airport includes two Glen Aran stores, WHSmith and of course a sizeable duty-free store for departing passengers. Other facilities within the airport include bars and restaurants, an oratory, an executive lounge, free Wi-Fi, currency exchange and ATM’s.

Some of our favourite hotels in Limerick include Perry Square Hotel & Spa, The Absolute Hotel and The Savoy Hotel.

Absolute Hotel
Absolute Hotel is situated in the Medieval Quarter of the city centre, next to the Abbey River. This four-star hotel is within easy walking distance of the city’s attractions, including King John’s Castle and the Milk Market. Facilities available include free parking, a bar and restaurant, fitness centre, business centre and free high-speed internet access.

The Savoy Hotel
Located on Henry Street in the heart of Limerick City, the five star Savoy Hotel has an excellent spa facility where the guest can avail of De-stress and Groom, Thai Massage, Advanced Laser Light and Ayurveda therapies. A recipient of a 2013 Certificate of Excellence award, the Savoy Hotel’s restaurant is renowned for its steaks, which are dry-aged for 21 days and cooked over wood!

Bunratty Castle and Folk Park is a 10-minute drive from Shannon Airport and is one of the top tourist attractions in the country. The castle is a 15th-century tower house where guests can enjoy a sumptuous medieval banquet. Other interests onsite include Bunratty Folk Park, where an impressive 19th Century authentic village street has been created, The Bunratty Walled Garden and The Bunratty Medieval Collection.

This genuinely stunning 13th-century castle stands on King’s Island in the heart of the Medieval Quarter in Limerick City. King John’s Castle visitor’s centre is filled with exhibitions using touch screen technology, 3D models and computer-generated animation. Outside you can find a medieval campaign tent and a blacksmiths forge. After the tour, why not relax in the castle’s café, which has fabulous views over the courtyard and River Shannon.

With over 50 stalls and 20 shops, Limerick’s famous Milk Market has something to offer for everyone! The market, located in Cornmarket Row in the city, provides a centralised location where shoppers can avail of fresh, natural foods, including artisan meats, organic fruit and veg, freshly caught fish, farmhouse cheeses, and more. Market themes include The Friday Flea Market, The Saturday Food Market and The Sunday Family Fair. Thank you for visiting our Limerick Travel Guide, we hope you found it informative. Enjoy your break.